From the time the utility was created in 1889 until 1941, McMinnville Water and Light generated all of its own power. MW&L began with a wood-fired (steam) electric plant along the Yamhill River and electricity was first brought to the City on December 11, 1889. In 1907, a hydro-electric plant (on Baker Creek Rd.) was constructed to meet increasing demand in the City. After WWI, wood prices soared and demand was still on the rise, so MW&L moved their generation to diesel run generators in a building located at 5th & Irvine St. (now known as Elizabeth Chambers Cellar) in 1926. Those generators operated until 1948 when continued increases in maintenance costs and rising demand caused MW&L to cease operation of the generators and purchase all of its power from Bonneville Power Administration (BPA).

The other 3% of MW&L’s power supply comes from Grant County PUD, which is all hydro generation (100% renewable). 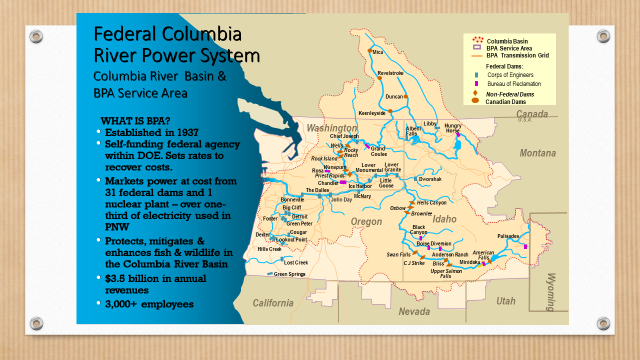